↓ Pull down to refresh

Merriam-Webster defines ‘Swag’, in urban slang terms, as referring to "stylish confidence”, although the origin of the word actually comes from the Scandinavian ‘svagga’, meaning to “rock unsteadily or to lurch”. Radirgy Swag, with its unusual direction and somewhat confusing properties, probably has more in common with the latter — at least until it gets going.

Milestone Inc, Radirgy’s original developer, did quite a bit of lurching as a company, too. Composed of ex-Compile staff (Aleste) they released five shoot-em-up (or ‘shmup’) arcade titles for Sega’s NAOMI hardware between 2004 and 2009, porting three to the Dreamcast and PlayStation 2. Bravely experimental, Milestone’s cult fanbase and its affection for the niche side of Japanese software motivated ports and sequels on a range of consoles, including the Gamecube and Nintendo Wii. In 2013 it all came to a calamitous end when founder Hiroshi Kimura was jailed for illegally selling shares in a Vietnam subsidiary, MS Bio Energy. The staff then resurrected the studio as RS34, preserving Milestone’s lineage with a handful of sequels.

John Carpenter has played Halo Infinite, the newest game in the long-running Xbox franchise, and he loved it. In fact, the famous director called it the “Best of the Halo series” in a recent tweet. 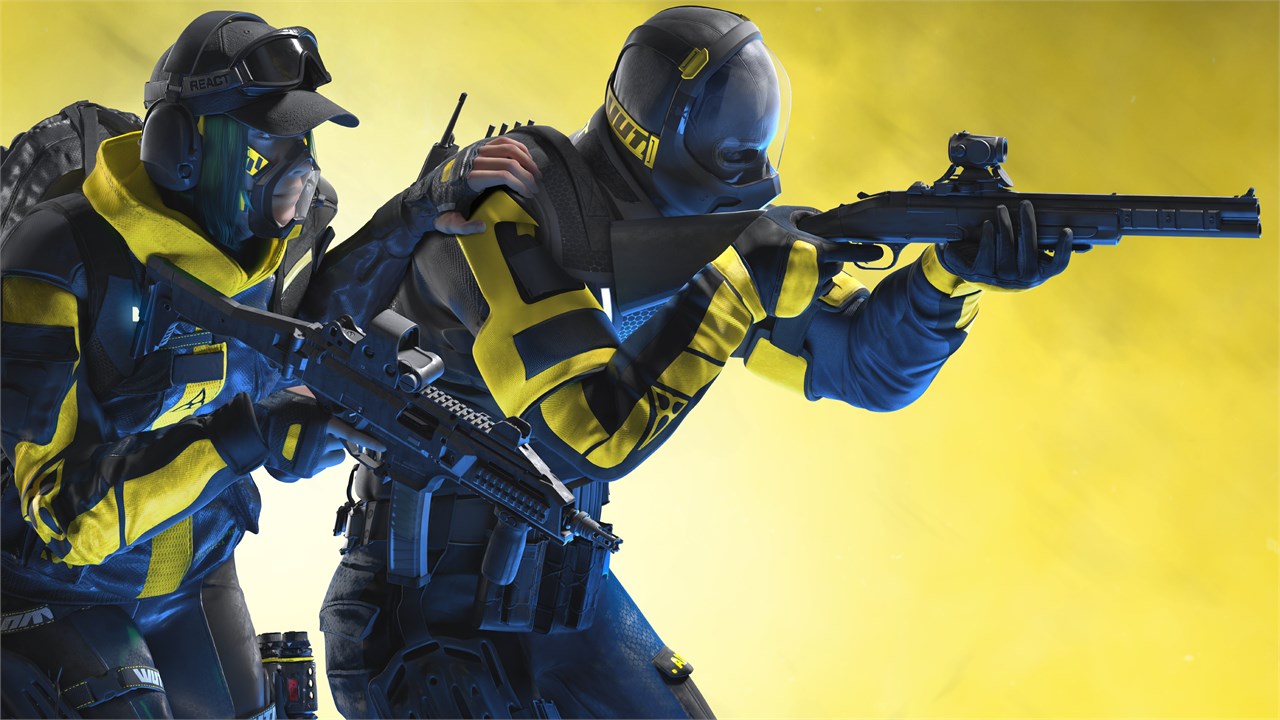 It's all about dogs, turn-based sims and shooting weird aliens. 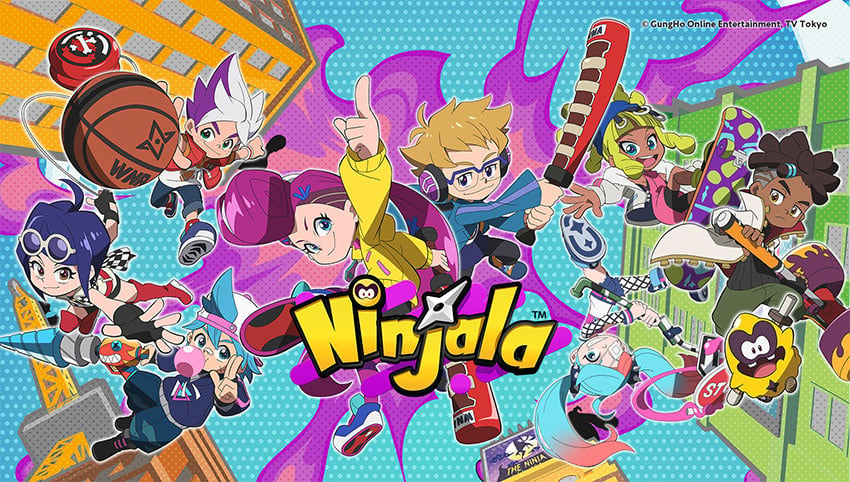 Tune in every week for a new episode.

Update : The first episode of Ninjala's new anime series is now live. It will only available until 20th January. Unfortunately, playback has been disabled on other sites by the video owner, so you'll have to head over to YouTube to watch it.

Original story : Towards the end of last year, GungHo Online Entertainment announced a brand new anime series for Ninjala. This one is said to be "more involved" than the previous YouTube cartoon series that already aired, and the plan is to "dive deeper into the game's colorful world".

Awesome Games Done Quick, the video game speedrunning marathon that raises money for charity, has set a new record for a single Games Done Quick event by raising over $3.4 million for the Prevent Cancer Foundation.

Hello! It’s time for Kotaku’s Sunday Comics, your weekly roundup of the best webcomics. The images enlarge if you click on the magnifying glass icon. 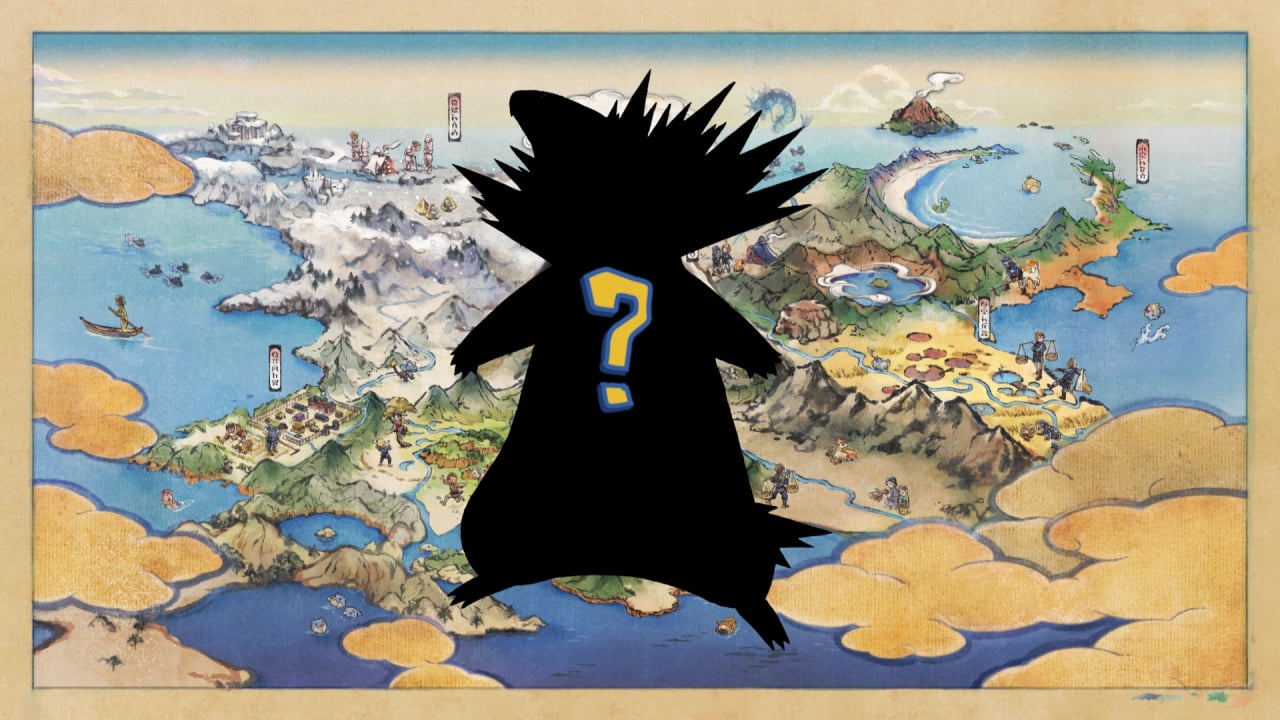 Few Nintendo franchises ignite as much speculation as a new Pokémon game. Leading up to release, dozens of new ‘mons are trickled out, making headlines and setting Pokémon communities ablaze. Pokémon Legends: Arceus, while not the beginning of a new generation, sparked a similar fervor when they showed new evolutions and a new form for Growlithe last August. And The Pokémon Company then fanned those flames further with a cryptic – but quite cool – reveal for Zorura and Zoroark’s Hisuian forms a few months later.

Since then, speculation has run rampant among fans. We’re guilty of it, too – not long ago, we looked at 10 Pokémon that deserve a Hisuian evolution. Now, with the 28 January release date fast approaching, we’re once again putting on our predictive thinking caps to read the future like Professor Oak reads a Pokédex.

Details about upcoming WWE 2K22, including its cover, have reportedly leaked online.

According to the Twitter account of TechnikNews, Rey Mysterio will allegedly grace this year's cover. The site also intimates that pre-orders will go live "soon", but stopped short of providing a definitive date - although we already knew that it'll be sometime in March. 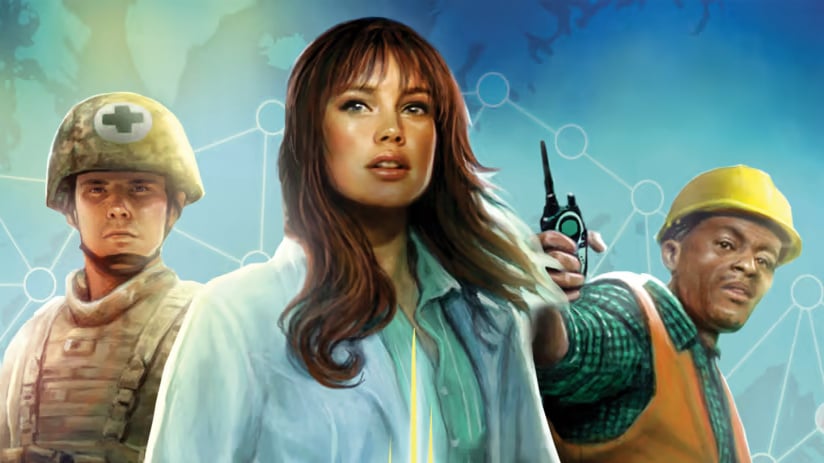 For "reasons" the publisher cannot disclose.

Publisher and developer Asmodee has had its digital board game Pandemic delisted from Steam. No proper announcement was made prior to this, leaving some fans in a state of shock.

While the news isn't much better for Switch players (yes, it's also leaving the eShop), it seems the game will be available on this platform a little longer. So if you haven't already downloaded it, now is probably the time to go and buy it from Nintendo's digital store.

The Harry Potter-themed game Hogwarts Legacy has reportedly been delayed to 2023.

The news comes almost a year to the day after Warner Bros. Games delayed Hogwarts Legacy from 2021 to 2022, stating at the time that "creating the best possible experience for all of the Wizarding World and gaming fans is paramount to us so we are giving the game the time it needs".

Asmosdee's digital board game, Pandemic, has been quietly withdrawn from sale "for a multitude of reasons that [the publisher] cannot disclose".

Without formal announcement, Pandemic was delisted from Steam on 6th January, and it looks as though players can't pick it up on mobile devices now, either (although if you already own the game, you should be able to re-download it again from your library if you're quick). All signs of the game have been scrubbed from the company's website, too.

Now this is a Brucie bonus.

It's a result we had previously only dared to hope for. When SNK Vs. Capcom: Match of the Millennium dropped on Switch almost a year ago, the fruits of the two fighting game companies' all-too-brief alliance were once again deemed "potentially in play". But when the labelled "Volume 1" of the wonderful Neo Geo Pocket Color Selection came out, we were a little cut up that the opportunity hadn't been taken to feature what is arguably the best game on the system, Card Fighters' Clash. We were sceptical that the professed first volume would ever be followed up by a second — as much as we love the Neo Geo Pocket Color (and we do, it's brilliant), it doesn't have the biggest library and most of the already-localised essentials were in that initial batch. Now, though, all bets are off as — thank god — Card Fighters' Clash has made it to Switch. Calloo callay, 'tis a frabjous day!

Originally released in 1999 (sufficiently close to the Japanese release of Pokémon Trading Card Game to allay any concrete accusations of style-biting), it's a card-battling RPG par excellence, with incredibly simple mechanics making the game — yes! — extremely easy to get into, but with depth enough to make it a long-term commitment to attain mastery.

Ratchet & Clank: Rift Apart has racked up nine nominations in this year's Annual DICE Awards, whilst Arcane's Deathloop has been shortlisted in eight categories.

Also in the running are Inscryption and It Takes Two with ​​six nominations, Returnal has made it to five shortlists, whilst Kena: Bridge of Spirits and Resident Evil Village each secure four.

Icarus developer RocketWerkz is making the "first of many" adjustments to the survival game's permadeath and difficulty issues.

Right now, if your character dies and/or is left behind after the mission timer expires, you'll lose them, their blueprints, and their XP for good - a problem further compounded by server issues around the time the game launched last month, and an acknowledgement that some players may have not realised how death worked in the session-based survival game. 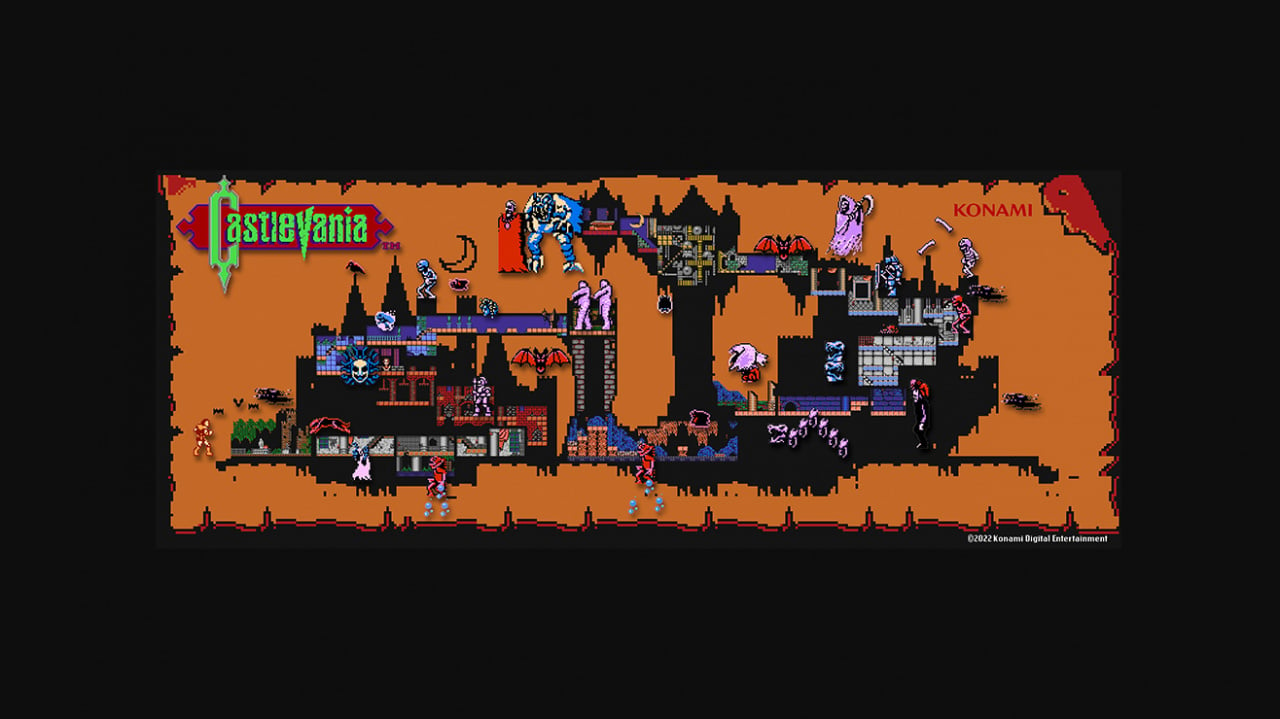 Whether you love or hate NFTs in gaming, it seems some companies are intent on monopolising on this new trend.

One, in particular, is Konami, who decided to celebrate Castlevania's 35th anniversary with a special 'Konami NFT Memorial Collection' auction. It's now sold off all '14 unique artworks" which consisted of game scenes, BGMs and drawn visuals, and managed to bank $162,000 USD in total. The sale took place on OpenSea - a marketplace where NFT artwork goes for the average price of around $12k.

PS3 games have started popping up on the PlayStation 5's store.

Up until now, PS3 games on the PS Store would typically redirect you to Sony's on-demand streaming service, PlayStation Now - which is, in fact, what happened when I checked the store myself this morning when preparing this story.

Over the past couple of weeks, details have begun to emerge about a new Armored Core game from From Software. As Vikki reported, videos and screenshots were apparently shown as part of a consumer survey, and leakers have talked online about what they were shown. Since the original news appeared, screenshots have been shared, albeit heavily edited to remove any identifying watermarks.

First things first, you're welcome! I am the person responsible for this wonderful news! I don't mean that I'm behind the leaks, I actually spurred From Software to make a new Armored Core. Y'see way back in September, I contacted Eurogamer, with a pitch for a feature on a largely-forgotten From Software mech game called Frame Gride. While Eurogamer had run out of the magic beans us freelance types get paid in, they did direct me to the folks at venerable gaming organ Edge, who showered me with beans in exchange for my words about From Software mech games. Within a week of the issue hitting the shelves, From Software had prepared a whole new Armored Core to show off to a select few.

One game which is sure to be a hit this year on the Nintendo Switch is the new 3D Kirby game, Kirby and The Forgotten Land, which looks set to sate the appetites of 3D platforming fans. We found out recently that the game will launch on 25th March and there will be a number […]

Dragon Ball: The Breakers is the recently announced eight-person online multiplayer game which is set in the Dragon Ball Xenoverse universe. The official Bandai Namco Blog sat down with the game’s producer Ryosuke Hara to discuss the upcoming game. Mr. Hara revealed a number of things about the game including that it won’t feature a […] 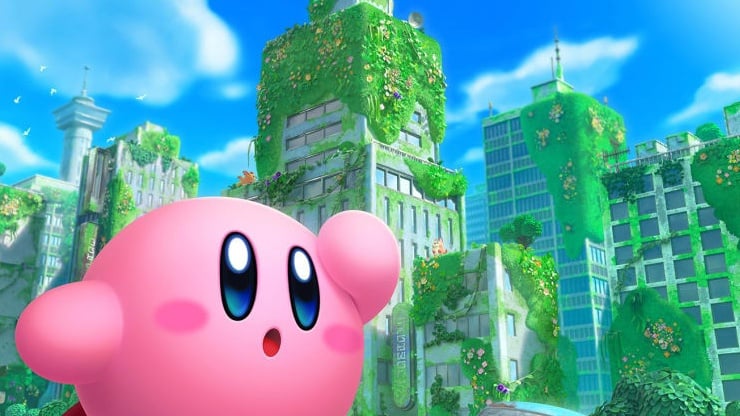 The pink puff's biggest adventure yet!

As we get closer to the release of Kirby and the Forgotten Land on the Nintendo Switch, more details are being revealed.

In the latest update, we've got new information about the title's file size. According to the eShop and Nintendo's website listing, Kirby's new adventure will require 5.8GB of free space. It appears to be Kirby's biggest Switch game so far (in terms of size).